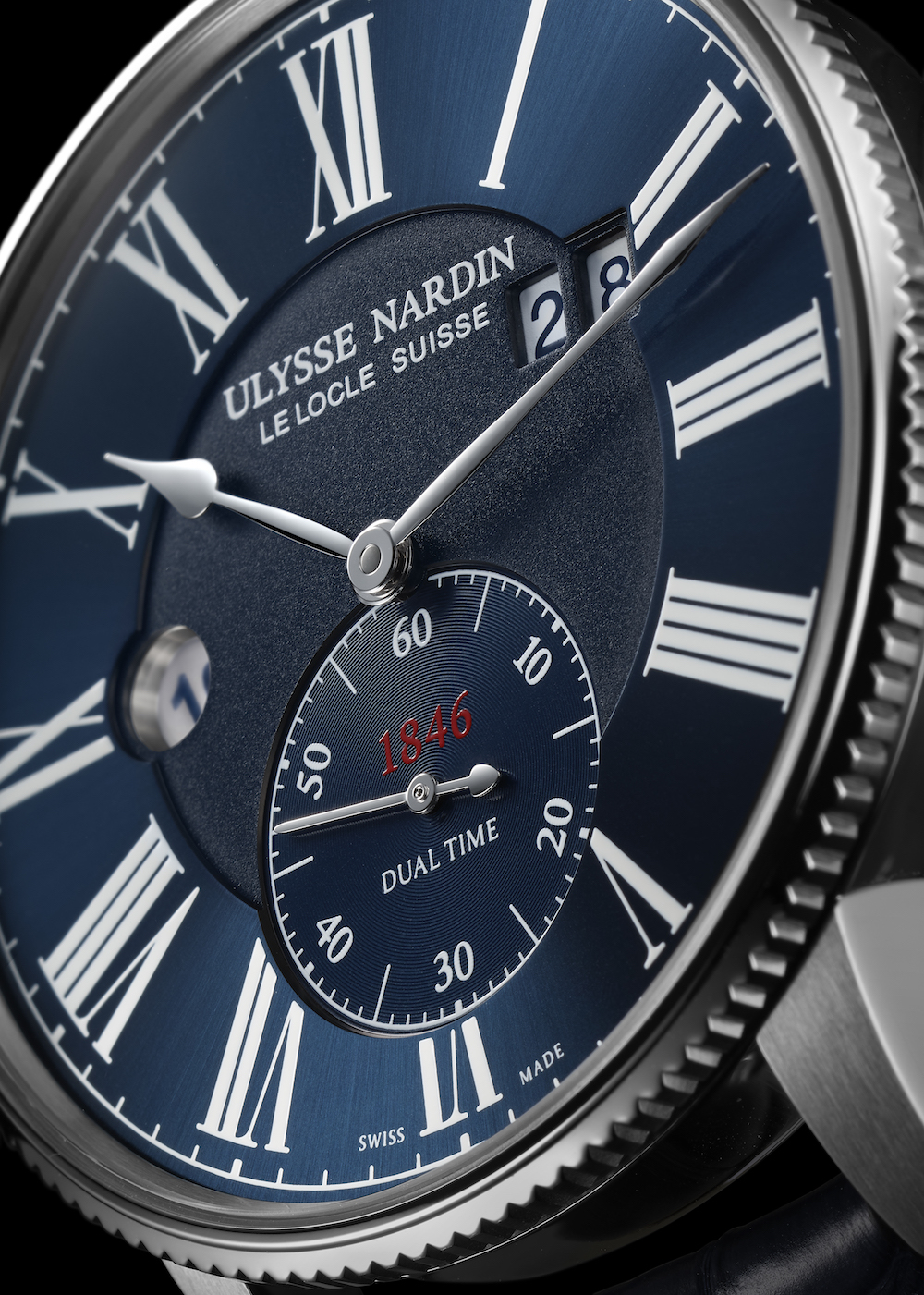 The new Marine Torpilleur Dual Time offers the technical advantages of the UN-334 manufacture calibre and the vintage DNA of the Marine Chronometer.

The new Marine Torpilleur Dual Time offers the technical advantages of the UN-334 manufacture calibre and the vintage DNA of the Marine Chronometer (fluted bezel, counter and Roman numeral hour-markers). The movement offers hour, minute and small seconds functions at 6 o’clock, and a large date in a double aperture at 2 o’clock, which can be adjusted in both directions.

While the “home time” display operates continually over a 24-hour period in an aperture at 9 o’clock, the small hand can be moved forward or backward very easily to the local time using the “+” and “-” push-pieces at 8 o’clock and 10 o’clock. To top off the refined mechanics, the calendar function syncs automatically no matter the direction of the adjustment.

The Marine Torpilleur Dual Time 44 mm in a polished and satin-finished stainless steel case offers a power reserve of 48 hours, water resistance to 50 meters and a sunray satin-finished blue dial. The timepiece is fitted with a blue alligator-skin strap with a steel folding clasp and is also compatible with a fabric strap with a velcro fastening.

Like all of Ulysse Nardin’s manufacture calibres, the UN-334 incorporates silicium technology, with the escapement wheel, anchor and balance-spring all made from this metalloid, which offers non-magnetic, elastic and durable properties to guarantee the utmost accuracy. This avant-garde material – which was first introduced to the watchmaking industry in the early 21st century thanks to Ulysse Nardin’s pioneering efforts – requires almost no lubrication and resists wear. As its production techniques are complicated to implement, they remain the preserve of just a handful of watch manufactures.

Ulysse Nardin’s tourbillon chronometers are a work of art that first originated in the late 19th century. The tourbillon formed part of a search for the greatest possible accuracy as its primary function is to compensate for deviations in the rate of the movement caused by Earth’s gravity in vertical positions. Since the 1980s, the House has perpetuated this heritage, continually developing new rotating carriages and adding to its long list of watchmaking achievements.

While last year the brand launched the Marine Torpilleur Tourbillon in black Grand Feu enamel as a limited edition of 175 pieces, it is now unveiling the Marine Torpilleur Tourbillon in white Grand Feu enamel as part of the permanent collection. With an open sapphire crystal case back, this polished and satin-finished steel model is completed by a fluted bezel. The white “Grand Feu” enamel dial designed by Donzé Cadrans proudly displays the power reserve at 12 o’clock. The UN-128 self-winding manufacture calibre powers the flying tourbillon with constant escapement, which is fitted with a flying silicium anchor, a system patented by Ulysse Nardin that won the Tourbillon Watch Prize at the 2015 annual GPHG (Grand Prix d’Horlogerie de Genève) ceremony.

This 42 mm-diameter mechanical masterpiece, water-resistant to 50 meters, is finished off with a blue alligator-skin strap with a folding clasp, and is also compatible with a rubber strap or metal bracelet.

Enamelling is a decorative technique mastered by a small circle of artisans and nowadays is only used on watches produced by the most prestigious watchmakers. Complexity, meticulous detail and realistic decoration are the main reasons why collectors have historically wanted to acquire timepieces with enamelled dials.

Ulysse Nardin is a leader in this field and a keeper of this artisanal know-how. It works in conjunction with its house Donzé Cadrans, which entirely produces this type of dial traditionally according to ancestral principles. The Donzé Cadrans artisans apply a variety of enamel techniques, in particular Cloisonné, Champlevé, Flinqué and Grand Feu. The term Grand Feu (“big fire”) comes from melting the enamel powder in a furnace heated to between 760 and 900°C, a technique used for all categories of enamelling.

Ulysse Nardin is the Manufacture inspired by the Ocean, producing advanced timepieces for explorers in pursuit of freedom. Founded by Mr. Ulysse Nardin in 1846, the company owes its reputation to its links with the sea: its onboard marine chronometers are among the most award-winning and reliable ever designed.

A pioneer in innovative technologies and the use of high-tech materials such as silicium, Ulysse Nardin is one of the few integrated manufactures with the in-house expertise to produce its own high-precision components and movements. In 2001, the Maison changed the face of contemporary watchmaking by launching the first Freak.

Today, in the Swiss towns of Le Locle and La Chaux-de-Fonds, Ulysse Nardin remains devoted to its quest for watchmaking perfection in four collections: Marine, Diver, Blast and Freak.
As of 2022, Ulysse Nardin and sister Maison Girard-Perregaux have formed an independent collective of high horology Manufactures.