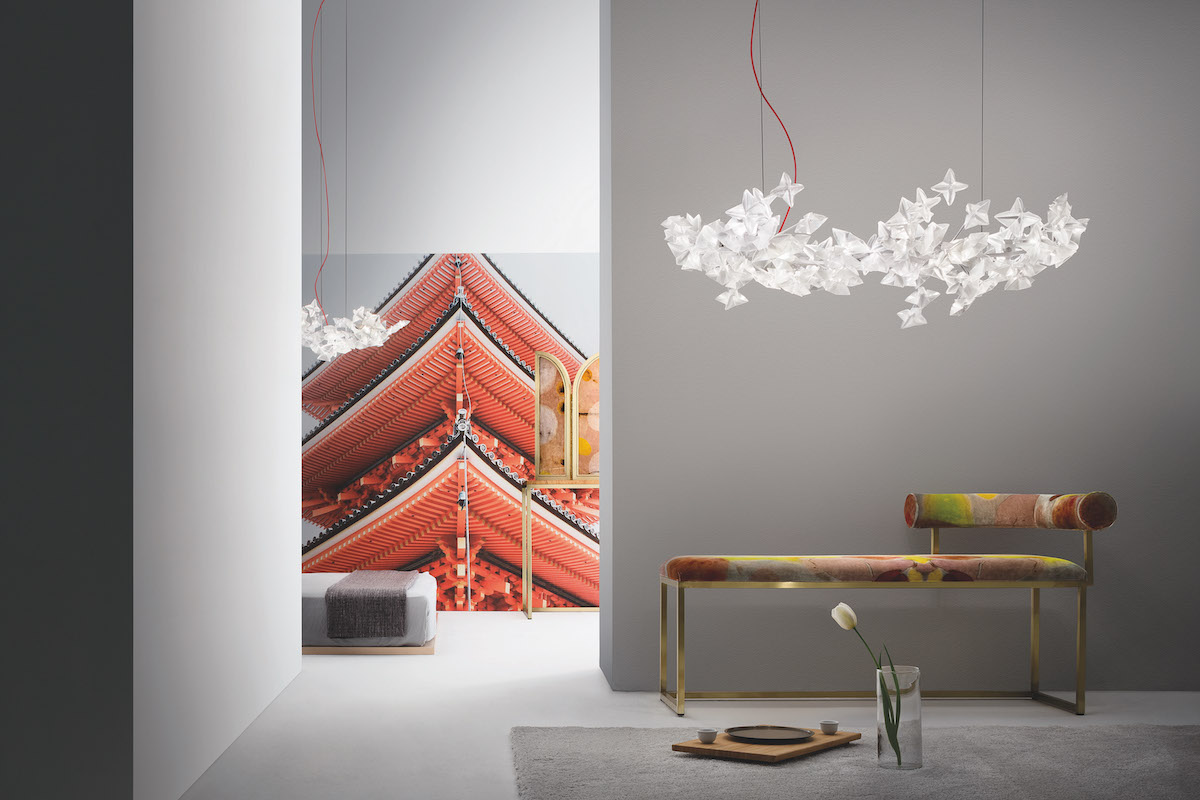 Hanami’s unique, delicately coloured illumination is distributed throughout hand-folded owers made of Lentiflex®, a noble material that recreates diamond-like reflections.

The lights made by Slamp give a soul to any object

Hanami is a symbol of delicate poetry, taking its name from the traditional Japanese ritual of observing blossoming cherry trees. The Hanami family includes ethereal suspensions, available in two sizes, as well as an applique version that rede nes the traditional ceiling lamp concept.

Hanami’s unique, delicately coloured illumination is distributed throughout hand-folded owers made of Lentiflex®, a noble material that recreates diamond-like reflections, mounted on a painted steel and polycarbonate frame that houses its LED sources.

“I have always worked with light, and it is the only element that gives a visible “soul” to any object, bringing it both warmth and magic. The most gratifying part of being a designer is losing myself in a creative universe where a product begins as a mere figment of my imagination, and transforms into something I can build, see and touch. Hopper stated, “All I wanted to do was paint sunlight on a house wall”. I work by modeling surprising shapes that cast poetic reflections when they encounter light. What should you expect from me in the future? Something eternally romantic and delicately moving.”

The unique style of the Slamp lighting pieces

Born in 1984. After a degree in Industrial Design in 2007, Adriano began his professional career in the Research & Development department of SLAMP, where he is still very successful today. Going against the trend for mass-produced items, Adriano Rachele succeeds in giving each of his pieces the feeling of single-editions, while still managing to produce them in series. Rachele believes that design should possess soul, expressing poetry and emotion and telling a story that goes beyond simple forms. This concept comes through in his designs for soft, sinuous forms that on one hand emphasise the uniqueness of their brand, and on the other enhance their unique craft-made style. His challenge is to create objects which combine technology, functionality and innovation with tradition and emotion, while maintaining their ironic and accessible nature. In 2010, he was recognised as one of the top young talents in Italian design for his Veli project, which won the Red Dot Design Award in 2012.

Hanami’s unique, delicately coloured illumination is distributed throughout hand-folded owers made of Lentiflex®, a noble material that recreates diamond-like reflections.

Go to mobile version
Um unsere Webseite für Sie optimal zu gestalten und fortlaufend verbessern zu können, verwenden wir Cookies. Durch die weitere Nutzung der Webseite stimmen Sie der Verwendung von Cookies zu. - We use cookies to ensure that we give you the best experience on our website. If you continue to use this site we will assume that you are happy with it.Ok