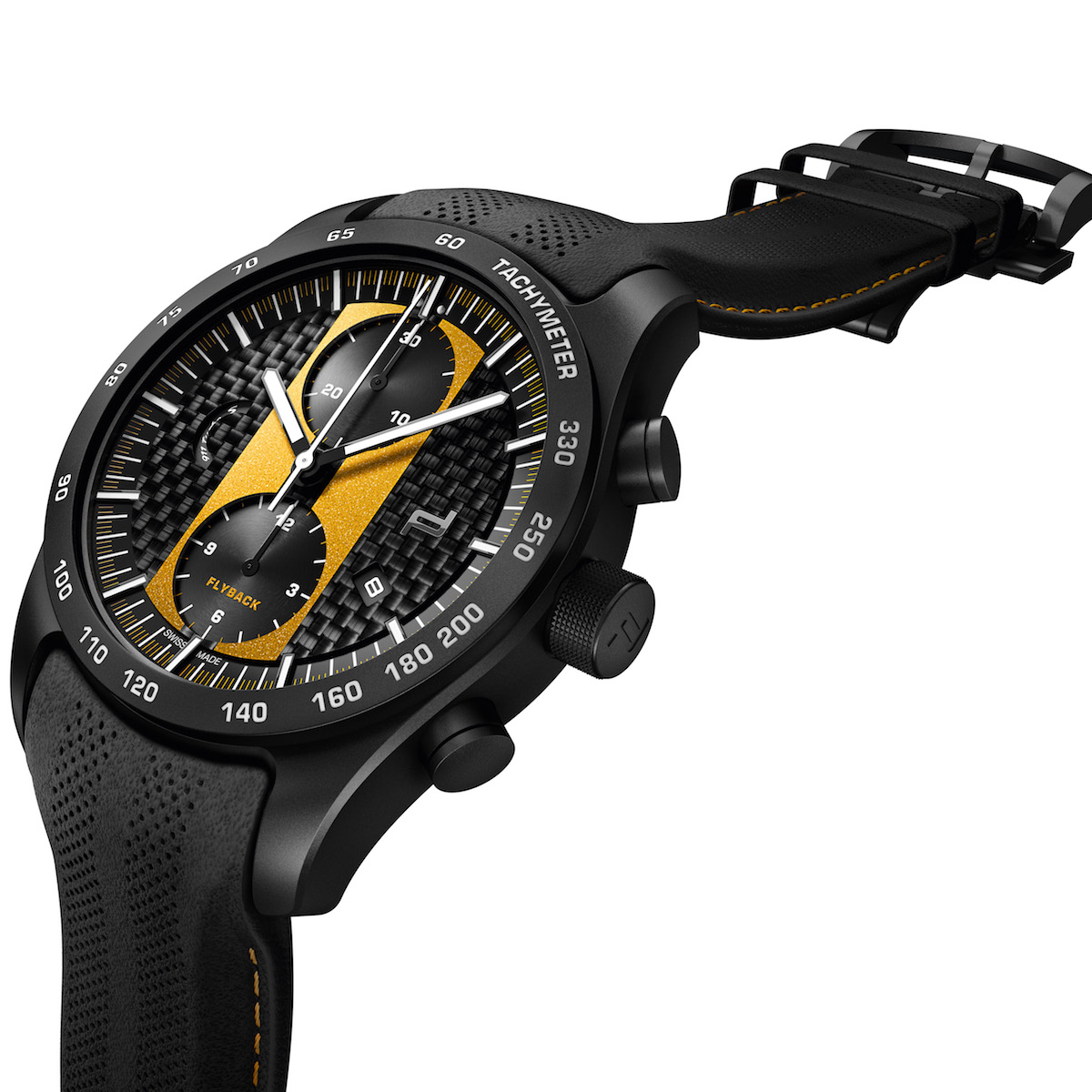 Inspired by the sporty performance of Porsche’s new masterpiece, Porsche Design has developed its first mechanical in-house movement for the Chronograph 911 Turbo S Exclusive Series. The development of the calibre Werk 01.200 took three years. It features a complex flyback mechanism, allowing the elapsed seconds hand to be stopped, returned to zero, and restarted instantly with a single push of a button, such as when clocking lap times during a race. The 4Hz-automatic movement results from state-of-the-art production methods. It combines the brand’s distinct concentrated competence in engineering and watchmaking with the expertise in vehicle construction.

The cut out of the movement’s barrel bridge not only exhibits the flyback function and the gear trains but, also, implements Porsche’s light-weight design in a consequent fashion. As is representative of Porsche Design, the movement is black. Its energy-optimized rotor, visible through the sapphire case back, features a design inspired by an alloy wheel and is partially crafted from tungsten. This innovative material is extremely difficult to process but provides the necessary weight to guarantee a highly powerful wind, despite the delicate design. The rotor, attached by a Porsche central locking with Porsche coat of arms, is similar to the wheel rims with accents of gold or done completely in black. In addition to being Porsche Design’s first in-house movement, Werk 01.200 also bears a certificate of the Swiss C.O.S.C. institution, verifying the accuracy of its performance.

The lightweight titanium case is finished with a characteristic black carbide coating. Its sportive carbon dial skilfully incorporates the recognizable carbon fiber strips of the 911 Turbo S Exclusive Series and is finished with the original lacquer car paint. At 9 o’clock, a small dial with the lettering “911 Turbo S Exclusive Series” indicates the movement. The strap is fabricated from the same high-quality leather and yarn used in the seats of the car, as is the iconic perforation.

Just like the models of the 911 Turbo S Exclusive Series, the timepieces are designed according to the individual wishes of their future owners. The goal: transform a special piece into an extraordinary one, like the 911 Turbo S Exclusive Series. The carbon dial is offered in six brilliant hues: Golden Yellow Metallic, Carrara White Metallic, Agate Grey Metallic, Black, Guards Red, and Graphite Blue Metallic. Matching seams are available in the same colors. The timepiece is delivered with a titanium bracelet and two leather straps featuring titanium deployment buckles. A Porsche Design tool for length adjustment is also included.

“Porsche Design for Porsche” is aimed at car aficionados and collectors, who know exactly what they want: luxury with individual execution, uncompromising form-and-function, along with perfect design and technology.

Just like the models of the 911 Turbo S Exclusive Series, the timepieces are designed according to the individual wishes of their future owners.